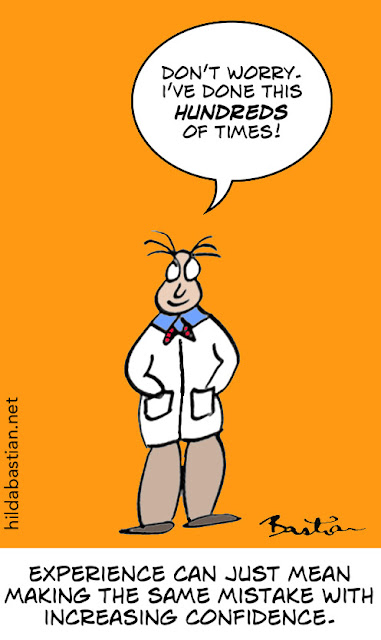 I've heard versions of this "increasing confidence" aphorism for years, but recently wondered it came from. This seems to be its source - A Skeptic's Medical Dictionary, by Michael O'Donnell:

Clinical experience. Making the same mistakes with increasing confidence over an impressive number of years.

Evidence-based medicine. Perpetuating other people's mistakes instead of your own.

(Cited in The Lancet - and see the book review in The BMJ.)

Shrikant Kalegaonkar pointed out that Oscar Wilde said something similar - and it is as exquisite as you would expect. It's here, in his 1890 The Picture of Dorian Gray:


He began to wonder whether we could ever make psychology so absolute a science that each little spring of life would be revealed to us. As it was, we always misunderstood ourselves and rarely understood others. Experience was of no ethical value. It was merely the name men gave to their mistakes. Moralists had, as a rule, regarded it as a mode of warning, had claimed for it a certain ethical efficacy in the formation of character, had praised it as something that taught us what to follow and showed us what to avoid. But there was no motive power in experience. It was as little of an active cause as conscience itself. All that it really demonstrated was that our future would be the same as our past, and that the sin we had done once, and with loathing, we would do many times, and with joy.


It was clear to him that the experimental method was the only method by which one could arrive at any scientific analysis of the passions; and certainly Dorian Gray was a subject made to his hand, and seemed to promise rich and fruitful results.

From the sublime to the ridiculous. I've another to add to this picture. It's based on an aphorism I coined myself in a piece I wrote in The BMJ in 2004 - cartoon version and post here on Statistically Funny:

Promising treatment. The larval stage of a disappointing one.

Calling treatments "promising" is a problem that seems to afflict all sides - including evidence-based medicine (EBM). As I'm lampooning the worst side of clinical experience with this cartoon though, it seems only fair for balance to have a shot at EBM at the same time. Here's where I've written about problems in EBM this year at MedPage Today and PLOS Blogs.

The most important article recently on this subject, though, is from Trisha Greenhalgh and colleagues: Six 'biases' against patients and carers in evidence-based medicine.

Posted by Hilda Bastian at 7:15 AM No comments: 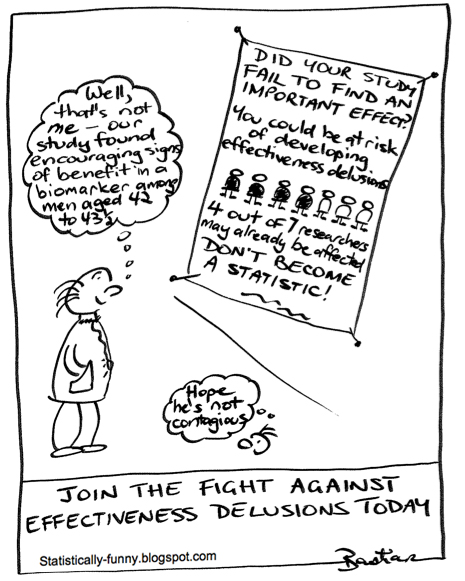 To inoculate yourself against "significant" effects that might not improve health, have a look at papers by Ioannidis and Gotzsche. Want to know more about the risks of relying only on biomarkers? Here's an explanation of their pitfalls at PubMed Health.
Posted by Hilda Bastian at 5:24 PM No comments:

As if data could speak for itself... 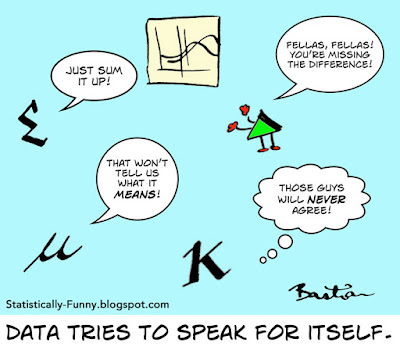 Posted by Hilda Bastian at 8:16 AM No comments:

Screening for disease - hoping for a miracle Disappointment in early intervention, and the cycle begins anew: even earlier intervention in even more people who will mostly not get sick anyway. Read more about why starting the disease clock ticking earlier sometimes helps, but often doesn't:  http://1.usa.gov/xywTjg

Posted by Hilda Bastian at 8:17 AM No comments:

Torturing the data - a cry from the heart 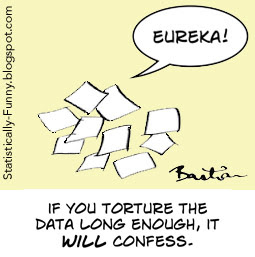 A take on a classic saying - can't face the data mining boom without it! You can read about the dangers of data analyses that weren't pre-planned and multiple testing (data dredging) here. Another important related read? Epidemiologist John Ioannidis' "Why most published research findings are false."

Posted by Hilda Bastian at 9:32 PM No comments: