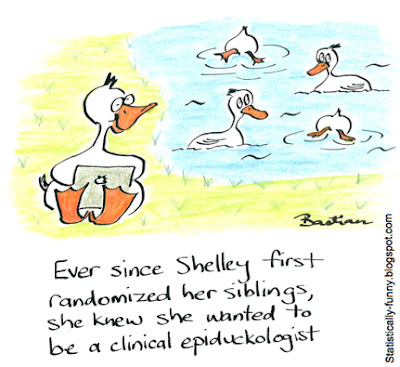 Technically, I guess Shelley would be a specialized type of epizoologist (or epizootiologist) - someone who studies patterns of diseases in animals.


Epidemiology comes from the word epidemic, which means visited upon humans. It was given its medical meaning by Hippocrates. But the study of epidemiology has become broader than only epidemics. And the profession is growing, too.


"Clinical epidemiology" was proposed as a discipline by John Paul in 1938. He described it as concerned with a deeper understanding of the patient and the social determinants of health. The first textbooks on clinical epidemiology were published in the 1980s: you can read more about the history here.


Around the same time, the term "evidence-based medicine" came into vogue, a concept that had unfortunately shed the social determinants' focus along the way. Without a notion of "unbiased" embedded in it either, evidence-based medicine is in danger of becoming a label that can be applied to almost anything. But clinical epidemiology rocks on! 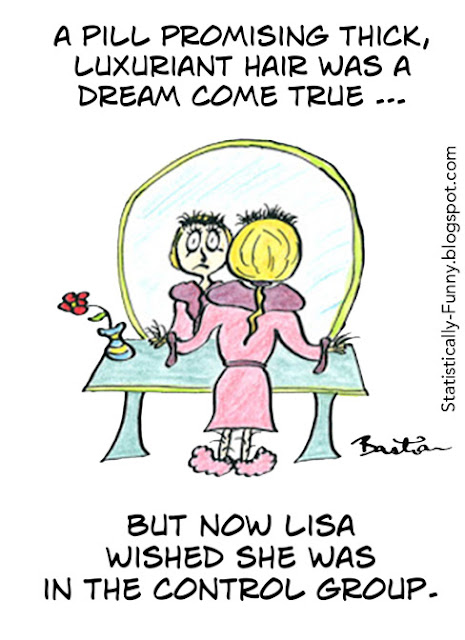 People often don't like the idea of "drawing the short straw" in a randomized trial. But being in the control group could turn out to be a very lucky break!

Ideally, trials are blinded so you don't know which group you're in. Knowing you're in the control group could affect your behavior and your opinions about whether or not you're benefiting (or being harmed). But even when it's not possible, it's not always fail-proof. (A placebo wasn't going to do THAT to Lisa's eyebrows!)

In theory, a trial is being done because it's genuinely not known whether the interventions being tested are better than alternatives (including doing nothing). And people who participate in clinical trials, on average, don't seem to be any worse off than people who don't - whether or not they were in a treatment or control group.

For studies that addressed this question, it was possible for researchers to get an average on experimental versus established treatments: only around half of new experimental treatments turned out to be better, and very few turned out to be a lot better. Those studies only covered about 1% of trials. Still, it's reassuring to know that people who participate in trials and end up in control groups aren't necessarily losing out.


If you'd like to read a quick introduction about control groups, go to the short sections 8.11 and 8.12 in Part 2 of the Cochrane Handbook. And here's research on blinded allocation to trials and on subjective assessment in trials.

Posted by Hilda Bastian at 7:54 AM No comments: 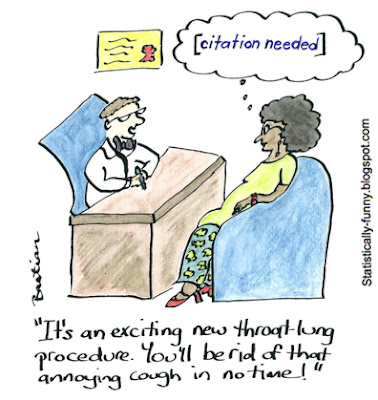 See also my guest blog at Scientific American:
"Are you a knowledge philanthropist? If not, why not?"


She's definitely picked up one of Wikipedia's most important messages [citation needed]: "Exercise caution before relying on unsourced claims." Even if you don't want to devote time to editing Wikipedia pages, why not learn to at least add the occasional (reliable) citation where it's needed? It's a far more important habit than clicking"like" buttons! Wikipedia's medical pages get well over 3 million visits a day.


Systematic reviews are designated as one of the reliable sources for medical claims in Wikipedia. Making better use of systematic reviews will be discussed by WikiProject Medicine at the international Wikipedia conference, Wikimania - kicking off tonight at the Library of Congress, Washington DC. Here's the abstract for my Wikimania talk.

Posted by Hilda Bastian at 6:49 AM No comments: 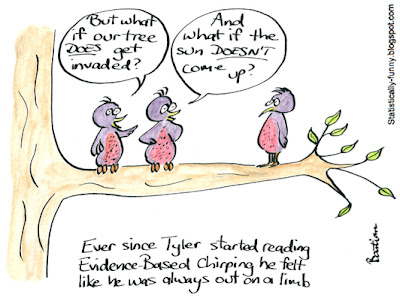 With apologies to all birds: they don't really believe their pre-dawn chirping makes the sun come up!


This kind of thinking is one of the most common traps for humans about their health though - even for healthcare professionals and researchers. Just because two things happen at the same time, it doesn't mean one causes the other.

Posted by Hilda Bastian at 6:55 AM No comments: