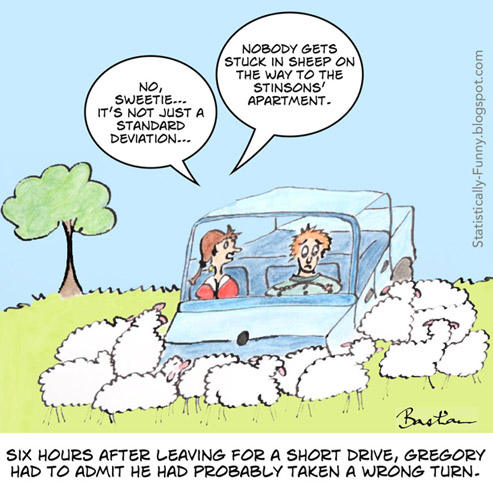 Of course, every time Cynthia and Gregory make the 8-block downtown trip to the Stinsons, it's going to take a different amount of time, depending on traffic and so on - even if it only varies by a minute or two.

Most of the time, the trip to the Stinsons' apartment would take between 10 minutes (in the middle of the night) and 45 minutes (in peak hour). Giving a range like that is similar to the concept of a margin of error or confidence interval (explained here).

So what's a standard deviation and what does it tell you? Well, it's not a comment on Gregory's behavior! Deviance as a term for abnormal behavior is an invention of the 1940s and '50s. Standard deviation (or SD) is a statistical term first used in 1894 by one of the key figures in modern statistics, Karl Pearson. 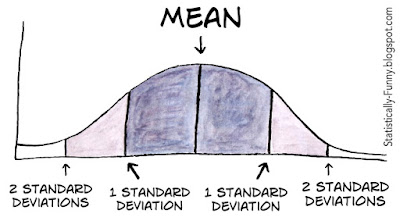 95% of results are going to be within 2 standard deviations in either direction from the mean.You can read about how 95% (or 0.05) came to have this significance here. Statistical significance is explained here at Statistically Funny.

From the standard deviation, it's just a hop, skip, and jump to the standardized mean difference! More about that and an introduction to the mean generally here at Statistically Funny.