Sheesh - what are those humans thinking? 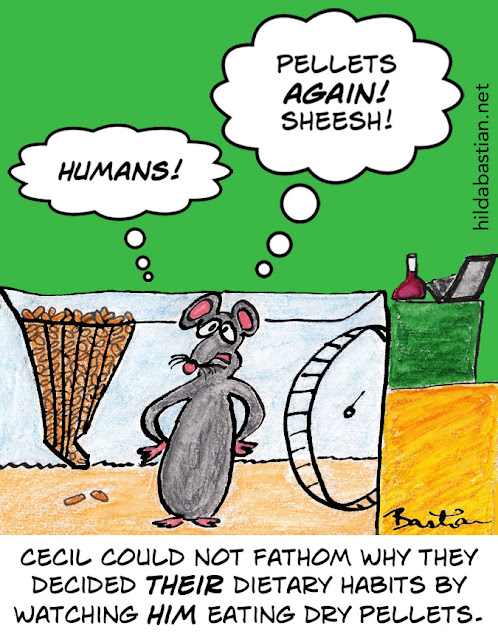 I can neither confirm nor deny that Cecil is now a participant in one of the there-is-no-limit-to-the-human-lifespan resveratrol studies at Harvard's "strictly guarded mouse lab"! If he is, I'm sure he's even more baffled by the humans' hype over there.

Resveratrol is the antioxidant in grapes that many believe makes drinking red wine healthy. And it's a good example of how research on animals is often terribly misleading and misinterpreted. I've written about it over at Absolutely Maybe if you're interested in a classic example of the rise and fall of animal-research-based hype (or more detail about resveratrol).

But this week, it's media hype about a study using human stem cells in mice in another lab at Harvard that's made me ratty. You could get the idea that a human trial of a "cure" for type 1 diabetes is just a matter of time now - and not a lot of time at that. According to the leader of the team, Doug Melton, "We are now just one preclinical step away from the finish line."

An effective treatment that ends the need for insulin injections would be incredibly exciting. But we see this kind of claim from laboratory research all the time, don't we? How often does it work out - even for the studies that are at "the finishing line" for animal studies?

Not all that often: maybe about a third of the time.

Bart van der Worp and colleagues wrote an excellent paper explaining why. It's not just that other animals are so different from humans. We're far less likely to hear of the failed animal results than we are of human trials that don't work out as hoped. That bias towards positive published results draws an over-optimistic picture.

As well as fundamental differences between species, van der Worp points to other common issues that reduce the applicability for humans of typical studies in other animals:

Limited genetic diversity could be an issue, too.

So how does the Harvard study fare on that score? They used stem cells to develop insulin-producing cells that appeared to function normally when transplanted into mice. But this was the very early stages. When it came to the test they reported on the ones with diabetes, there were only 6 (young) mice who got the transplants (and 1 died) (plus a comparison group). Gender was not reported - and as is common in laboratory animal studies, there wasn't lengthy follow-up. This was an important milestone, but there's a very long way to go here. Transplants in humans face a lot of obstacles.

Van der Worp points to another set of problems: inadequacies in research methods that we've learned over time in human research bias the proceedings too much - including problems with statistical analyses. Jennifer Hirst and colleagues have studied this too. They concluded that so many studies were bedeviled by issues such as lack of randomization and blinding by those assessing outcomes, that they should never have been regarded as being "the finishing line" before human experimentation at all.

There's good news though! CAMARADES is working to improve this - with the same approach for chipping away at these problems as in human trials: by slogging away at biased methodologies and publication bias. And pushing for good quality systematic reviews of animal studies before human trials are undertaken. It's well worth half an hour to watch the wonderful talk by Emily Sena at Evidence Live 2015.

Laboratory animal research may be called "preclinical," but even that jargon is a bit of over-optimistic marketing. Most of what's tried in the lab will never get near human trials. And when it does, it will mostly be disappointing. Laboratory research is needed, and encouraging progress is great. But people should definitely not be getting our hopes up too much about it.

The National Institutes of Health (NIH) addressed the issue of gender in animal experiments earlier in 2014. After I wrote this post, the NIH also released proposed guidelines for reporting preclinical research.

Thanks to Jonathan Eisen for adding a link for the full text of the paper to PubMed Commons, as well as to a blog post by Paul Knoepfler discussing the context of the stem cell work by Felicia Pagliuca, Doug Melton and colleagues. NHS Behind the Headlines have also analyzed and explained this study.

Thanks to Jim Johnson for pointing an oversight: that animal studies - this one included - can also suffer from having too little follow-up.

Interest declaration: I'm an academic editor at one of the journals whose papers on animal research I commended (PLOS Medicine) and on the human ethics advisory group of another (PLOS One), but I had no involvement in either paper.


Update: Checked, post and cartoon refreshed, and link to Sena's talk at Evidence Live on 5 December 2015.
Posted by Hilda Bastian at 2:01 AM