Researching our way to better research? 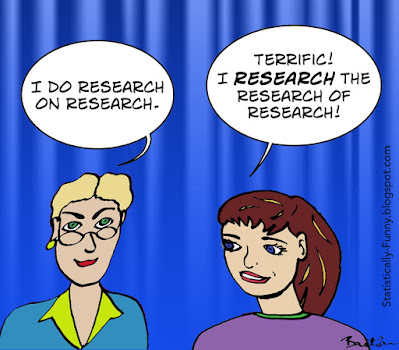 Here we see an expert in evidence synthesis meet a metascientist!
Evidence synthesis is an umbrella term for the work of finding and making sense of a body of research – methods like systematic reviews and meta-analysis. And metascience is studying the methods of science itself. It includes studying the way science is published – see for example my posts on peer review research. And yes, there's metascience on evidence synthesis, too – and syntheses of metascience!
The terms metascience and metaresearch haven't been tossed around for all that long, compared to other types of science. Back when I took my first steps down this road in the early 1990s, in my neck of the science woods we called people who did this methodologists. A guiding light for us was the statistician and all-round fantastic human Doug Altman (1948-2018). He wrote a rousing editorial in 1994 called "The scandal of poor medical research," declaring "We need less research, better research, and research done for the right reasons." Still true, of course.
Altman and colleague, Iveta Simera, chart the early history of metascience over at the James Lind Library. Box 1 in that piece has a collection of scathing quotes about poor research methodology, starting in 1917 with this one on clinical evidence: "A little thought suffices to show that the greater part cannot be taken as serious evidence at all."
The first piece of research on research that they identified was published – with only the briefest of detail, unfortunately – by Halbert Dunn in 1929. He analyzed 200 quantitative papers, and concluded, "About  half of the papers should never have been published as they stood." (It's on the second page here.)
The first detailed report came in 1966, by a statistician and medical student. They reckoned over 70% of the papers they examined should either have been rejected or revised before being published. A few years after that, the methods for evidence synthesis took an important step forward when Richard Light and Paul Smith published their "procedures for resolving contradictions among different research studies" (Light and Smith, 1971.)
Evidence synthesis and metascience have proliferated wildly since the 1990s. And there's lots of the better research that Altman hoped for, too. Unfortunately, though, it's still in the minority – even in evidence synthesis. Sigh! Will more research on research help? Someone should do research on that!
Hilda Bastian
Posted by Hilda Bastian at 4:42 PM