My work and I

The birth of my first child - at home, in Sydney in 1981 - led me into both maternity consumer activism and perinatal epidemiology. It all went from local to national then international, and from maternity/perinatal to health generally pretty quickly. And when I first started communicating health information on the internet in the early 1990s, it was love at first sight!

My newsletter is Living With Evidence. My blog on scientific themes is Absolutely Maybe at PLOS Blogs (formerly at Scientific American blogs), and I blog about grief at Grief Collection.  I have also been a contributor to WIRED, and have occasionally blogged at the BMJ. I am working on a biography, a
nd I am a Wikipedian. I list scientific publications here.


I'm active on Mastodon: hildabast@mastodon.online
(I used to be active on Twitter.)

More on how I got from there to here


I've had the honor of leading these health consumer groups:
That included spending a lot of time in a lot of committees, especially for Australia's National Health & Medical Research Council (NHMRC). Things like being the lay person on the national maternal mortality committee, and chairing the development of clinical practice guidelines on preterm birth (1995-1997) (with a guide for parents). 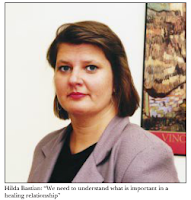 This headshot (left) was taken at the CHF office: here it comes from the print version of a 1999 BMJ profile.

In those consumer advocacy years, I chaired the process developing the Australian national Statement on Consumer and Community Participation in Health and Medical Research.

I also spent lot of time on national ethics committees, the Medical Services Advisory Committee (which determines which new health procedures will get public reimbursement) and national health priority-setting.

But my favorite part was the Consumers' Health Forum itself.

Along the way I started doing health research. My first foray into perinatal epidemiology was data collection and analysis on home births with the National Perinatal Statistics Unit (published in 1990).

In the early 1990s, Iain Chalmers roped me in with a great bunch of people to start the Cochrane Collaboration.

The photo (left) is the day we officially founded the Collaboration in Oxford in 1993 (and there's that mauve jacket again).


From 1997 to 2001, I was (part-time) coordinating editor of the Cochrane review group on Consumers and Communication. That's the part of the organization responsible for reviews on communication and the relationship between patients and professionals.

As well as taking up systematic reviewing, I started cartooning - as part of the training workshops I was doing in understanding health research, and as editor of Cochrane News (from issue 3 in 1995 to issue 12 in 1998). I recycled a few of them for Statistically Funny in the early days (like this one).

By 2001, my time as a consumer advocate had wound down. My main work became communicating clinical effectiveness information on the internet, first with this website and then this one.

In 2004, I moved to Germany to work as Head of the Health Information Department at a new national agency, IQWiG (the Institute for Quality and Efficiency in Healthcare). You can read about this work in these slides from 2010. 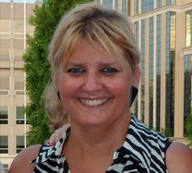 In 2011, I moved to Washington DC, contracted to work in part of the National Institutes of Health (NIH). This photo (left) is from around the time I arrived.

I was chief editor for some PubMed projects from 2011 to 2018, at the National Center for Biotechnology Information (NCBI), in the National Library of Medicine (NLM) (one of the Institutes of the NIH). One involved curating clinical effective resources and running a since discontinued website called PubMed Health. And the other was PubMed Commons, a commenting system that used to be part of PubMed. I also ran several research integrity projects at PubMed.

In 2018, I returned to Australia to work on my PhD and finally begin writing a biography I've been researching for years. I keep my bio and disclosure of interests updated at my PLOS Blog.

Statistically Funny is a personal hobby. What's on this website reflects my personal views only and is not in any way associated with any organization with which I am involved.

I hope you enjoy Statistically Funny!