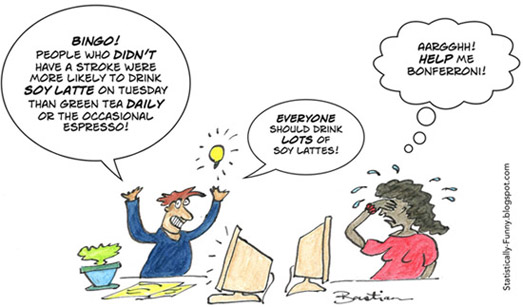 Oh boy - look what a data hunter has dragged in this time! Why is this problem so common? And who on earth is Bonferroni?

Our friend here found one "statistically significant" result when he looked at goodness knows how many differences between groups of people. He's fallen totally for a statistical illusion that's a hazard of 'multiple testing'. And a lot of headline writers and readers will fall for it, too.

It's pretty much inevitable that multiple testing will churn out some some totally random, unreliable answers.

A "statistically significant" difference isn't proof that the difference is a "real" one that could hold true for others. But it estimates that the probability of finding a difference roughly like this in this data if it's not real is less than a 5/100 or 5% (a "p" value of less than 0.05).

If you test for multiple possibilities, you need to expect even your statistically significant "findings" to be freak occurrences on average 5 times out of a 100 (or 1 in 20 findings). If you test only a few things, your chances of this kind of random error is very low.

But especially if you have a big dataset, the more things you look at, the higher the chance is that you'll drag total nonsense out. With high-powered computers crunching big data, this becomes a big problem - large numbers of spurious findings that can't be replicated.

Carlo Bonferroni (1892-1960) was an Italian mathematician. His name graces some statistical tests used to interpret results when doing multiple tests. But the multiple testing methods with his name that we use today were developed by Olive Jean Dunn, in papers she published in 1959 and 1961 [PDF].

There are other ways of approaching these problems. Some are concerned that techniques based on the Bonferroni correction are too conservative - too likely to throw the baby out with the water, if you like. So they use measures that have a different basis, such as the False Discovery Rate (FDR) [PDF].

Statistical tests can't totally eliminate the chance of random error, though. So you usually need more than just a single possibly random test result to be sure about something.

What about multiplicity issues in systematic reviews? As the Cochrane Handbook (section 16.7.2) points out, systematic reviews concentrate on estimating pre-specified effects - not searching for possible effects. Safeguards still matter, though. Even pre-specified analyses need to be kept to a minimum. And how many analyses were done needs to be kept in mind when interpreting results.

If you would like to read more technical information about multiple testing, here are some free slides from the University of Washington. And if you want to read more about the controversies and issues, here's a primer in Nature and an article in the Journal of Clinical Epidemiology (behind paywalls).

Update on 20 March 2016 added Olive Jean Dunn (including creating a biography page for her on Wikipedia) and refined the description of statistical significance - thanks to the feedback from an anonymous commenter.
Posted by Hilda Bastian at 10:26 AM