Well, he would say that, wouldn't he? 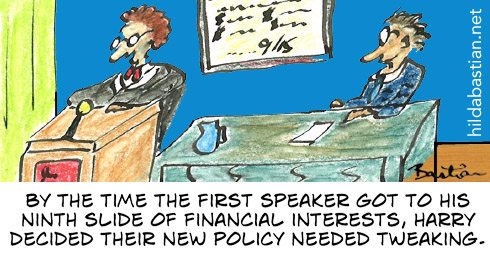 When a big medical conference is on, we're saturated with coverage of the presentations. This makes them a critical target for marketing and a major contributor to unrealistic expectations about what health care - and health research - can really do.

To their great credit, professional societies are developing policies to ensure disclosure of financial interests by presenters. After all, financial interests pose an obvious risk of bias to research about the effects of health care - and to what the research means for clinical practice and education. Disclosures are increasing at conferences, but compliance can be a problem.

Disclosure is made especially hard when so many people make a mockery of disclosing their potential conflicts - maybe by not pointing it out when the commercial source of their salary has been passed through a filter first - or by ignoring major hospitality from a company while at the same time declaring trinkets. The disclosure of indirect financial interests is a particular problem.

And then there's our side of it as an audience: we need to get better at interpreting people's disclosures and knowing when our antenna should really be out - without throwing the baby out with the bathwater. That's not easy either! I wrote a reader's guide to disclosure of interests in medical journals a while ago, if you're interested in this aspect of bias. It's called "They would say that, wouldn't they?"

[Update 27 August 2016] A study published in August 2016 in JAMA Oncology basically brings my cartoon to life. They argue that the major cancer society, ASCO, should reconsider its policy:

"83 of 221 presentations (37.6%) at last year’s ASCO meeting had COI disclosure slides that were displayed at a speed so fast that they exceeded the range of comprehension for most readers...We also found that 124 of 242 speakers (51.2%) had at least 1 financial COI, and this number increased to 151 of 216 (69.9%) when all financial ties were disclosed as opposed to only those deemed relevant."

In May, to coincide with the release of an editorial I wrote for PLOS Medicine on a study on COI in clinical practice guidelines, I wrote a reader's guide to conflicts of medicine at Absolutely Maybe, with a round-up of recent research and debates at medical journals.

The rate reality is going, I'm going to have to do a more surreal cartoon!

Posted by Hilda Bastian at 6:13 PM