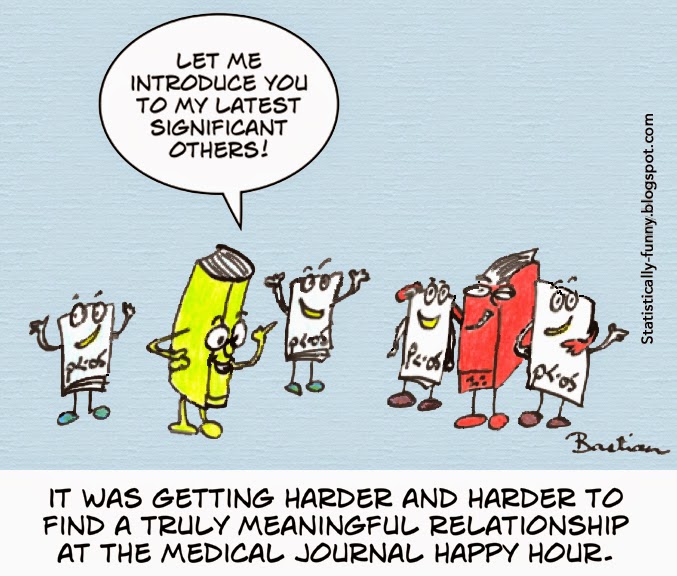 We're deluged with claims that we should do this, that or the other thing because some study has a "statistically significant" result. But don't let this particular use of the word "significant" trip you up: when it's paired with "statistically", it doesn't mean it's necessarily important. Nor is it a magic number that means that something has been proven to work (or not to work).

The p-value on its own really tells you very little. It is one way of trying to tell whether the result is more or less likely to be "signal" than "noise".  If a study sample is very small, only a big difference might reach that level, while it is far easier in a bigger study.

But statistical significance is not a way to prove the "truth" of a claim or hypothesis. What's more, you don't even need the p-value, because other measures tell you everything the p-value can tell you, and more useful things besides.

This is roughly how the statistical test behind the p-value works. The test is based on the assumption that what the study is looking for is not true - but instead, that the "null hypothesis" is true. The statistical test estimates whether you would expect the result you got, or one further away from "null" than that result, if the hypothesis isn't true.

If the p-value is <0.05 (less than 5%), then the result is compatible with what you would get if the hypothesis actually is true. But it doesn't prove it is true. You can't conclude too much based on that alone. The threshold of 0.05 for statistical significance means the level for the test has been set at 95%. That is common practice, but still a bit arbitrary.

You can read more about statistical significance over here in my blog, Absolutely Maybe - and in Data Bingo! Oh no! and Does it work? here at Statistically Funny.

This is why people will often say something was statistically significant, but clinically unimportant, or not clinically significant. Clinical significance is a value judgment, often implying a difference that would change the decision that a clinician or patient would make. Others speak of a minimal clinically important difference (MCID or MID). That can mean they are talking about the minimum difference a patient could detect - but there is a lot of confusion around these terms.

Researchers and medical journals are more likely to trumpet "statistically significant" trial results to get attention from doctors and journalists, for example. Those medical journal articles are a key part of marketing pharmaceuticals, too. Selling copies of articles to drug companies is a major part of the business of many (but not all) medical journals.

And while I'm on the subject of medical journals, I need to declare my own relationship with one I've long admired: PLOS Medicine - an international open access journal. As well as being proud to have published there, I'm delighted to have recently joined their Editorial Board.