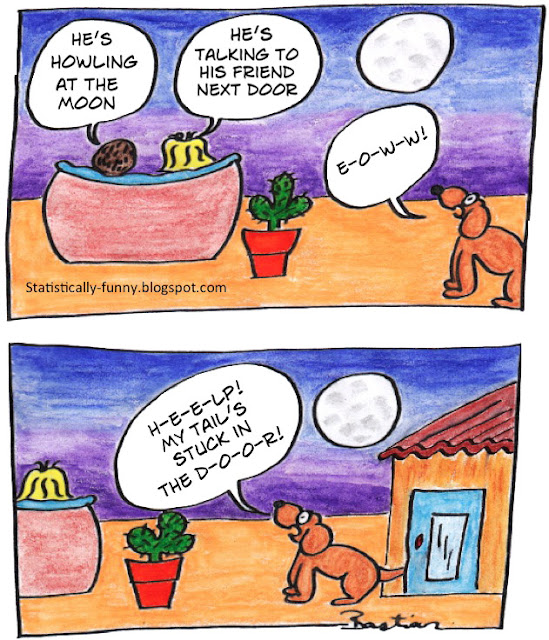 When dogs howl at night, it's not the full moon that sets them off. Dogs are communicating for all sorts of reasons. We're just not all that good at understanding what they're saying.

We make so many mistakes about attributing cause and effect for so many reasons, that it's almost surprising we get it right as often as we do. But all those mistaken beliefs we realize we have, don't seem to teach us a lesson. Pretty soon after catching ourselves out, we're at it again, taking mental shortcuts, being cognitive misers.

It's so pervasive, you would think we would know this about ourselves, at least, even if we don't understand dogs. Yet we commonly under-estimate how much bias is affecting our beliefs. That's been dubbed the bias blind spot that we tend to live in.

Even taking all that into account, "effect" is an astonishingly over-used word, especially in research and science communication where you would hope people would be more careful. The maxim that correlation (happening at the same time) does not necessarily mean causation has spread far and wide, becoming something of a cliche along the way.

Take this common one: "Side effects include...." Well, actually, don't be so fast to swallow that one. Sometimes, genuine adverse effects will follow that phrase. But more often, the catalogue that follows is not adverse effects, but a list of adverse events - things that happened (or were reported). Some of them may be causally related, some might not be.

You have to look carefully at claims of benefits and harms. Even researchers who aren't particularly biased will word it carelessly. You will often hear that 14% experienced nausea, say - without it being pointed out that 13% of people on placebos also experienced nausea, and the difference wasn't statistically significant. Some adverse effects are well known, and it doesn't matter (diarrhea and antibiotics, say). That's not always so, though. (More on this: 5 Key Things to Know About Adverse Effects.)

If the word "effect" is over-used, the word "hypothesis" is under-used. Although generating hypotheses is a critical part of science, hypotheses aren't really marketed as what they are: ideas in need of testing. Often the language is that of attribution throughout, with a little fig-leaf of a sentence tacked on about the need for confirmatory studies. In fact, we cannot take replication and confirmation for granted at all.

Posted by Hilda Bastian at 1:55 PM