More than one kind of self-control 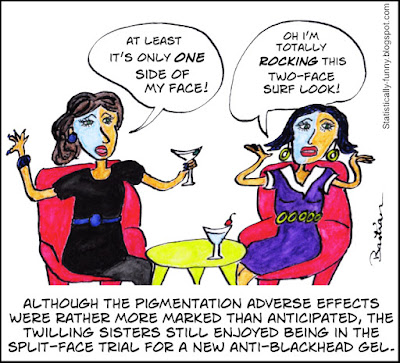 If you like reading randomized trials about skin and oral health treatments - and who doesn't? - you come across a few split-face and split-mouth ones. Instead of randomizing groups of people to different interventions so that a group of people can be a control group (parallel trials), sections of a person are randomized.

It's not only done with faces and teeth. Pairs of body parts can be randomized too, like arms or legs. These studies are sometimes called "within-person" trials. This kind of randomization means that you need fewer people in the trial, because you don't have to account for all the variations between human beings.

It has to be a treatment that affects only the specific area of the body treated, though. Anything that could have an influence on the "control" part is called a spill-over effect. There are still inevitably things that happen that affect the whole person, and those have to be accounted for with this kind of trial. Body part randomization is one of several ways a person can be their own control: the n of 1 trial is another way.

Randomizing sections didn't start in trials with people: it began with split-plot experiments in agricultural research. The idea was developed by the pioneer statistician, Sir Ronald Aylmer Fisher, who had done breeding experiments. He explained the technique in his classic 1925 text, "Statistical Methods for Research Workers."

It's great to see that neither blackheads nor treatment effects are hampering the Twilling sisters' style! They do seem to be at risk of susceptibility to the skincare industry's hard sells, though. Those issues are the subject of my post Blemish: The Truth About Blackheads.

Posted by Hilda Bastian at 3:22 AM