More Than Average Confusion About What Mean Means Mean 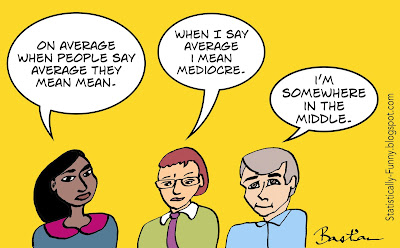 She's right: on average, when people talk about "average" for a number, they mean the mean.

But then you hear people make that joke about "almost half the people being below average" - and that's not the mean any more. That's a different average. It's the median - the number in the middle. It comes from the Latin word for "in the middle", just like the word medium. That's why we call the line that runs down the middle of a road the median strip, too.

If the numbers in a group are all pretty close to each other - like our example here, or, say, the ages of everyone in a class at school - then there's not much difference between the mean and median.

But if the numbers in a group are wildly far apart - the ages of the people who like Star Wars movies, for example, or whose favorite singer is Frank Sinatra - then it can make a very big difference. Even if Strangers In The Night had enough of a resurgence to drag the average age of Ol' Blue Eyes listeners down, the big Sinatra fan base would still skew older!

How far apart numbers in a dataset are spread from each other is called variance: if the numbers bunch up in the middle, the variance is small. And understanding or dealing with variance is where we start to head in the direction of, well, sort of means of means. 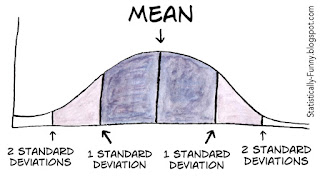 From here, it's a hop, skip to another calculation based on the mean that you often come across in health studies. It's a way to standardize the differences in means (average results) called the standardized mean difference (SMD).

The SMD needs to be used when outcomes have been measured in similar, but different, ways in groups that researchers are comparing.

There's a lot you can make sense of when you know what the means mean!

Feel like testing your knowledge of the mean, median, and mode? (The mode is the number in a set that occurs the most often: so if our example had been 2 + 3 + 4 + 4, then the mode would have been 4.) Try the Khan Academy quiz.

Interested in the ancient roots of averages? Examples from Herodotus, Thucydides, and in Homer here (very academic).

Note: Edited to address broken links, on November 6, 2022.
Hilda Bastian
Posted by Hilda Bastian at 10:51 AM