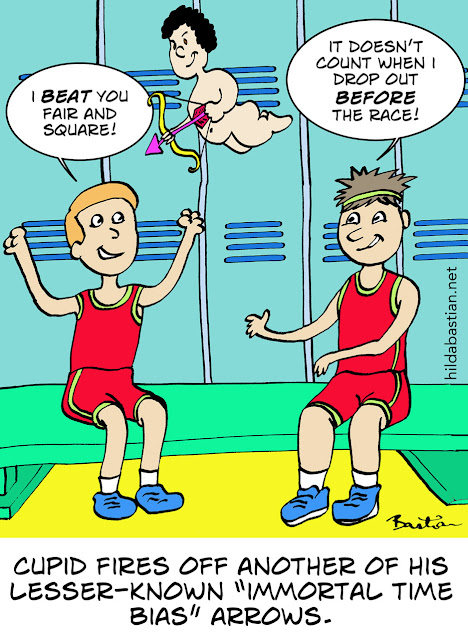 This type of time-dependent bias often afflicts observational studies. It's a particular curse for those studies relying on the "big data" from medical records.  A recent study found close to 40% of susceptible studies in prominent medical journals were "biased upward by 10% or more". A study in 2011 found that 62% of studies of postoperative radiotherapy didn't safeguard against immortal time bias. That could make treatment look more effective than it really is.

So what is it? It's a stretch of time where an outcome couldn't possibly occur for one group - and that gives them a head start over another group. Samy Suissa describes a classic case from the early days of heart transplantation in the 1970s. A 1971 study showed 20 people who had heart transplants at Stanford lived an average of 200 days compared to 14 transplant candidates who didn't get them and survived an average of 34 days.

Those researchers had started the clock from the point at which all 34 people had been accepted into the program. Now of course, all the people who got the transplants were alive at the time of surgery. For the stretch of time they were on the waiting list, they were "immortal": you could not die and still get a heart transplant. So when people on the waiting list died early, they were in the no-transplant group.

When the data were re-analyzed by others in 1974 to factor this into account, the survival advantage of the operation disappeared. (More about the history in Hanley and Foster's article, Avoiding blunders involving 'immortal time'.)

This bias is also called survivor or survival bias, or survivor treatment selection bias. But time-dependent biases don't only affect death as an outcome. It can affect any outcome, not just death. So "immortal time" isn't really the best term. Hanley and Foster call it event-free time.

Carl von Walraven and colleagues are among the group that call this kind of phenomenon "competing risk bias":

Competing risks are events whose occurrence precludes the outcome of interest.

They are the authors of the 2016 study I mentioned above about how common the problem is. They show the impact on data in a study they did themselves on patient discharge summaries.

Von Walraven says the risk grew as people started to do more time-to-event studies. They put the problem down partly to the popularity of a method for survival ratios that doesn't recognize these risks in its basic analyses. That's Kaplan-Meier risk estimation. You see Kaplan-Meier curves referred to a lot in medical journals.

Although they're called curves, I think they look more like staircases. Here's an example: number of months survived here starts off the same, but gets better for the blue line after a year, plateauing a couple of years later. 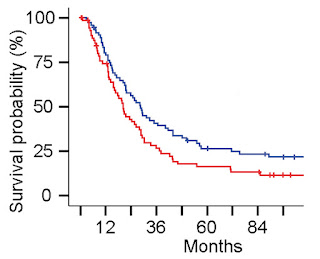 Some common statistical programs don't have a way to deal with time-dependent calculations in Kaplan-Meier analyses, according to von Walraven. You need extensions of the programs to handle some data properly. The Royal Statistical Society points to this problem too, in the description for their 2-day course on Survival Analysis. (One's coming up in London in September 2016.)

Hanley and Foster have a great guide to recognizing immortal time bias (Table 1, page 956). The key, they say, is to "Think person-time, not person":

If authors used the term 'group', ask... When and how did persons enter a 'group'? Does being in or moving to a group have a time-related requirement?

Given the problem is so common, we have to be very careful when we read observational studies with time-to-event outcomes and survival analyses. If authors talk about cumulative risk analyses and accounting for time-dependent measures, that's reassuring.

But what we really need is for the people who do these studies - and all the information gatekeepers, from peer reviewers to journalists - to learn how to dodge this arrow.

More reading on a somewhat lighter note: my post at Absolutely Maybe on whether winning awards or elections affects longevity.

The Kaplan-Meier "curve" image was chosen without consideration of its data or the article in which it appears. I used the National Library of Medicine's Open i images database, and erased explanatory details to focus only on the "curve". The source is an article by Kadera BE et al (2013) in PLOS One.

Email ThisBlogThis!Share to TwitterShare to FacebookShare to Pinterest
Labels: Biases